I was talking with a friend the other day and he mentioned that he gets up tight speaking in public. I’ve had conversations over the years with others who expressed varying degrees of self-consciousness about a myriad of issues. In some cases, there was a dislike for attending functions that would require meeting large numbers of people. In other instances, it was a solo meeting with a high profile individual. Someone even mentioned how nervous they were during a radio interview. Entrepreneurs are thrust into a multitude of situations that require interacting with others and we must be able to do so gracefully and easily.

Being self-conscious is inwardly focused. I remember having no issue speaking in public during high school. And in my early college days I spoke at political events and in other situations with relative ease. Then one day I went to class completely unprepared and had to make a presentation – and I bombed. What an embarrassing and humiliating experience! It rattled me to the point that I was self-conscious about public speaking for a number of years thereafter. I tried everything advised by the experts. Take deep breaths. Smile. Tell a joke. I even envisioned a naked audience! I suppose these tips worked to a small degree, but they weren’t the panacea.

What I eventually figured out was that I needed to get out of myself. In other words, I needed to get out of my own way. I was holding me back. Notice that there were a lot of “I” and “me” words in what I just said. And that was the problem. I was looking inward rather than outward. I was making the situation about me and not what I was truly there to do. Over the years I’ve spoken countless times in public and actually enjoy it. Now there’s more an anticipation of excitement rather than dread. And I’m energized meeting people in large and small groups alike.

Allow me to illustrate the notion of “getting out of myself” with another story. In October 2016, my mother-in-law passed away; she had asked me to deliver the eulogy at her funeral. I prepared and practiced my remarks and thought a great deal about how I might react in the moment. My biggest concern was the possibility of becoming emotional during the eulogy. This in itself wouldn’t necessarily be a bad thing, except this sort of emotion can be contagious – especially for a grieving family. When the time came, I understood immediately that the remarks to be made were not about me. This was an occasion to honor and celebrate my mother-in-law. And thus, I became totally outwardly focused.

Most of us have an innate desire to be liked and/or thought well of by others. When we begin to have doubts that others may not like us, we can become very nervous or even embarrassed. I suppose for many of us this goes back to childhood days when we may have been mocked at some point in time. Young children can be brutally candid to the point that scars are caused and invariably must be dealt with when we become adults. Developing a strong sense of self-worth – warts and all – is important to overcoming self-consciousness. And when we can get out of ourselves and focus on others, we push unhealthy self-awareness totally out of the picture. This is true for public speaking as well as interactions with others – in groups or one-on-one. Warren Buffet speaks often in public. He’s not a handsome man and he’s not particularly articulate. But his words can be captivating because he is incredibly comfortable in his own skin and clearly is focused on his audience rather than himself.

So, here’s the simple truth. When we are preparing for a presentation, a speech or interacting with others in a group setting, think about who it’s for. Is it about us? Or is it for others? When we can shine the spotlight away from ourselves, we are getting out of our own way and our encounter will be filled with ease and grace. 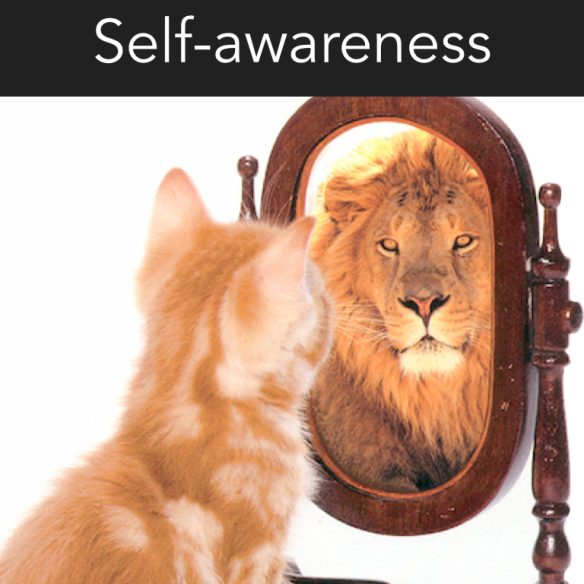