Allow me to set the scene. We are about to embark upon a major project that could make or break our company. There are a wide range of complexities involving this project and it will require a supreme effort from our entire team to successfully bring it all together. But there’s just one problem. Invariably someone on the team is not as responsive as necessary or doesn’t seem to possess the same sense of urgency as does everyone else. As a result the ball gets dropped and we fail. Alternatively, others on the team step in to pick up the slack which creates resentment and hard feelings. How do we effectively deal with this rogue team member that is at the center of all this?

There are a number of steps that can be taken to stack the deck in our favor when it comes to ensuring responsiveness and urgency. Step one is to develop clear written roles and accountabilities for each member of the team. Considerable thought should be given to this process so that a high level of precision in role definition can be attained. Being as comprehensive as possible in describing a role will produce clarity. Vague and generic verbiage muddles the picture and may lead to confusion later on. As team members we have overall roles and accountabilities. For major projects it’s a good idea to dive even deeper into a separate set of intentions for each of us relative to the specific matter at hand.

Step two involves gaining a commitment from each team member. One of the best ways to accomplish this is to hold a team meeting to reaffirm the vision for the project. For example, suppose we are developing a proposal to win a major piece of business. We assemble the team that will be creating and implementing the proposal and paint the picture of what it looks like when we win (vision). In the meeting we review team member roles and accountabilities and ask each person to make a verbal (and maybe even written) commitment to do their part in this endeavor. It’s critical that this commitment be made among those on the team and not just to the enterprise.

The third step is for the team leader(s) to make an assessment of the capabilities of each team member. The roles and accountabilities have already been established for each position that will participate in the project. Will the individuals who fill those positions be able to perform the tasks assigned to them? And do they have the tools and resources that are needed to prosecute their roles effectively? If it’s determined that a team member isn’t equipped for his or her role – i.e. skills, training or experience – then that person becomes the weak link in the chain. A decision must be made at the outset whether or not to replace that team member with someone else, or be prepared to provide greater than normal support for that individual.

Finally, team members should be encouraged to set their own deadlines so long as they are compatible with the overall project timeline. When a deadline is imposed by others, there’s always the opportunity for someone to claim it to be unrealistic. Accountability is first to one’s self and then to the team. Self-imposed deadlines are congruent with this approach to accountability. As team leaders it’s equally important for us to be aware of all deadlines and check with team members well in advance of them. Then if there’s a chance that a deadline will be missed we can muster additional resources or take other steps to make sure that the train still runs on time.

Instilling responsiveness and a sense of urgency within a team is a process. When we clearly define roles and accountabilities, obtain commitment, assess capabilities and resources, and work with team-member established deadlines, the process should put us in a position to win the prize we are seeking. 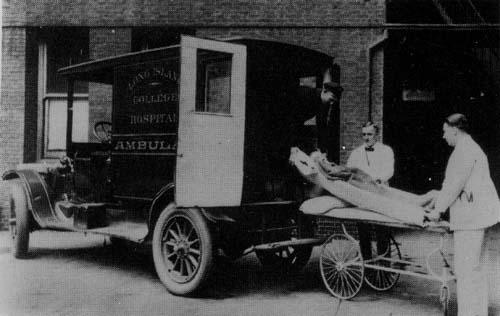 An early motorized version of a LICH ambulance.